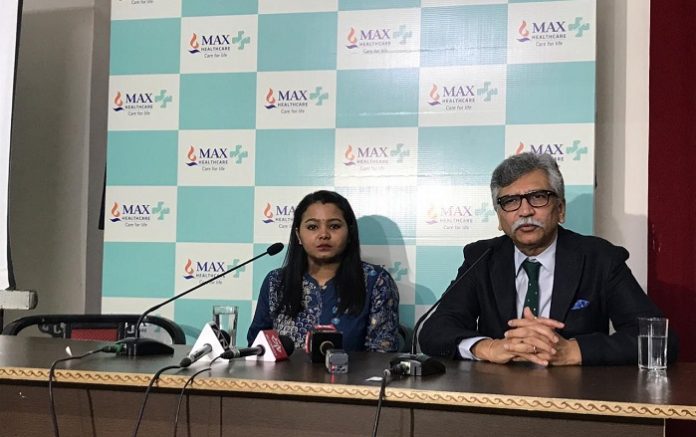 New Delhi: Life took a devastating turn for Krity Kishore,  two years ago when a crane came crashing down on her right hand at a highway construction site in Ghazipur while she was returning from work on her two wheeler. She suffered a global injury of the right upper limb involving bone, joint, tendon, nerve, muscle, blood vessels and skin. Severity of injury was very high and the patient was in a state of shock when brought to the emergency at Max Hospital, Patparganj on 29th, August 2017.

The lower part of patient’s right arm was almost detached. She was immediately taken to operation theatre for reconstruction surgeries and procedures to try & save the limb. The team which was to undertake this complicated medical task was led by Dr Manoj Johar, Director, Aesthetic and Reconstructive Surgery, Max Super Speciality Hospital, Patparganj.

Ms. Krity Kishore was leading a healthy, independent and fulfilling life before being hit by the unfortunate life altering accident. She was engaged and was two months away from tying the knot (October 2017) when the fatal accident occurred. Her right hand was badly crushed, skin damaged, tissues distorted completely and bones and joints were disoriented. The blood flow was obstructed which hampered the oxygen supply to the brain as well due to shock resulting from the accident. Doctors at Max Healthcare not only gave a new lease of life, but her hope. Her fiancé turned out to be her strength and stood beside her during her times of trial. He was besides her through the period of surgeries and recovery, before they got married on 22nd January 2018 within 5 months of the dreadful accident.

Speaking about this complex case, Dr Johar, said, “Before reaching Max she was taken by passer-by to another hospital where she received emergency treatment for stabilisation.  When her case was presented to us, we immediately knew the road to recovery will be long and tedious not only for the patient but for us also as the medical challenge was immense. We undertook initial diagnostic tests and evaluation and began procedures to restore the structure of her hand. It was decided that we will have to undertake multiple reconstructive surgeries over a period of time. The success rate of such procedure are almost 20-30%. Her first surgery went up to almost 8hours. most of her subsequent surgeries also took an equally long time. . Firstly, she underwent for urgent limb salvage surgery involving a team of doctors from plastic surgery, anaesthesia, orthopaedics and vascular surgery department and then shifted to ICU care for close monitoring and observation.”

Dr Johar, further explained, “This case is a living example that the importance of timely, specialized surgical help & family & social support which is a hallmark of the Indian society, plays such an important role in positive outcome. The recovery took her 2 years but the love and support which she got from her husband and family helped her to recover fast from the trauma – both physical and at a psychological level. Patient was advised few specific post-operative precautions like- physiotherapy, joint evaluations, divine interventions and alternative healing methodologies. Also, she was advised to not exert her hand too much doing personal, family and professional work. she is recovering well and leading a healthy and happy life.”

*This news is based on a press release.