The bio-energy plant developed by DBT-ICT Centre for Energy Biosciences at ICT Mumbai with the support of the Department of Biotechnology, Ministry of Science and Technology and its Public sector Undertaking – Biotechnology Industry Research Assistance Council (BIRAC), has successfully demonstrated for the first time the production of Ethanol from lignocellulosic biomass and is a one of its kind response to the Government’s initiatives on Make in India and Swachh Bharat Abhiyan.

India’s first 2G or Cellulosic Ethanol (alcohol) demonstration plant is based on the novel and indigenous 2G-Alcohol technology developed by the DBT-ICT Centre for Energy Biosciences, a Centre of Excellence established in 2008 at the Institute of Chemical Technology, Mumbai by the Department of Biotechnology, Ministry of Science and Technology of India. 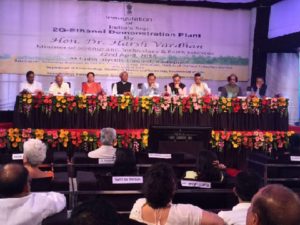 At the inauguration on the Earth Day 2016,  Dr Harsh Vardhan took pride in the indigenously developed technology and its evolution into a demonstration plant. “More such examples are needed for the Make in India and Swachh Bharat Abhiyan to be successful initiatives, which can make India stand out as a leader in the world’s struggle to save the earth from challenges like global warming” he pointed out.

It is a novel Indigenous technology suited to both Indian & Global Needs and is designed for handling all types of agricultural residues like Bagasse, Rice Straw, Wheat Straw, Bamboo, Cotton Stalk, Corn Stover, Wood chips etc with optimum product yields.

“This is an example of how we can work on the challenges the world faces, define them in Indian labs and then strive to solve them for the benefit of the world community in general and India in particular. At DBT we promise to work towards more such initiatives”, mentioned Dr K VijayRaghavan, Secretary, Department of Biotechnology.

This plant comes at a time when the country is making an effort to meet the mandate of 5% blending of renewable biofuel in both ethanol and diesel. While diesel biofuel blending is near zero, the petrol blending today stands at an overall of about 3% in the form of first generation or molasses based 1G-Ethanol. With an annual  requirement of about 500 crore liters, the oil companies are looking at various options for sourcing ethanol as the current total installed capacity of 1G-ethanol stands at about 265 crore liters. In such a scenario, the targets of 10% blending by 2017 and 20% by 2020 look remote unless agriculture waste based ethanol i.e. second generation or 2G-Ehanol production technologies are successfully demonstrated. India’s potential for 2G-Ethanol production from a mere 10% of its non-food and non-fodder agricultural residues, currently estimated to be available in excess of 300 million tons, stands at nearly 1000 crore liters of ethanol.

However, the 2G-Ethanol Alcohol production technologies world-wide are yetto be economically and technologically viable despite more than 100 pilot plants and about 10 demonstration and commercial plants erected and commissioned globally over the last decade.

In this context the Country’s first Demonstration plant built on the DBT-ICT indigenous technology as a continuous automated plant assumes considerable significance. The technology and the plant, projected to be capable of converting any biomass feedstock like wheat straw, rice straw, bagasse, cotton stalk, bamboo, etc. to alcohol in less than 24 hours, if successfully operated and scaled-up will establish India as a major global technology provider in the arena of renewables and reduction in carbon-emissions besides effecting considerable savings in import of crude-oil. The demo-plant is all set to run at a capacity of 10 ton biomass/day.

The DBT-ICT Centre has already developed designs of plants for 250 ton/day and 500 ton/day capacities. The Department of Biotechnology is confident that this technology with the lowest capital and operating costs would allow 2G-Alcohol to be produced and sold at competitive price.

Rahul Koul - June 27, 2022
324
Click to watch the full interview Abhishek Mohan, Founder and Chief Executive Officer, HempStreet has been in the startup space for over 15 years now....

Rahul Koul - October 3, 2022
102
Subhamoy Dastidar, Co-Founder and Director, Lilac Insights believes that there has been a growing acceptance of genetic testing in India